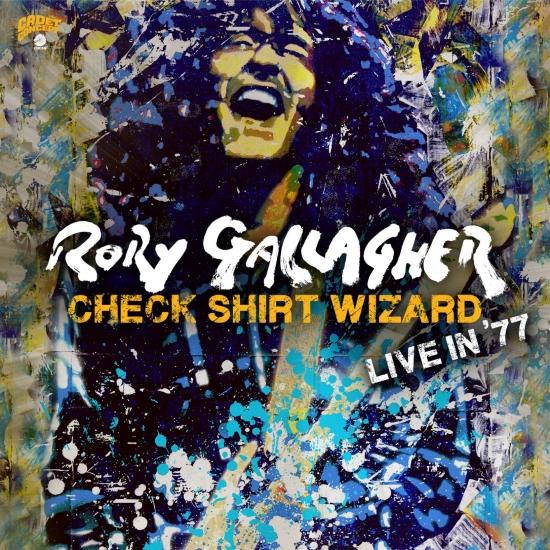 Following on from the highly successful ‘BLUES’ album, Chess/UMC are proud to be releasing ‘Check Shirt Wizard- Live In ‘77’.
This 20-song, previously unreleased, set is culled from four shows (London, Brighton, Sheffield and Newcastle) during an early 1977 tour across the UK in support of Rory’s then latest album 'Calling Card'. Featuring fantastic live versions of tracks from that album as well as songs from the 1975 'Against The Grain' album and other live favourites.
This new album has been mixed from the original multi track tapes from the Rory archive, which were recorded by the Rolling Stones and Jethro Tull’s mobile studios and mastered at Abbey Road.
Rory Gallagher's most popular albums have always been his live ones, such as ‘Live! In Europe’, ‘Irish Tour '74’ and Stage Struck. He was an artist that came alive when onstage and this album covers a previously undocumented live period. “The whole concert was taped on the Jethro Tull Maison Rouge mobile by the way, and from where I was standing that concert on record would surpass the classic “Live in Europe” album. And that’s saying a lot.” Brian Harrigan Melody Maker – 1977, Hammersmith Odeon, London.
If ever there was a “musician’s musician” then that accolade surely belongs to Rory Gallagher. Renowned for his blistering live performances and highly respected for his dedication to his craft, he died in 1995, aged just 47, yet his reputation has continued to flourish in the years since. Indeed, some of rock’s most seminal figures, from Jimi Hendrix to Eric Clapton, Queen’s Brian May to The Smiths’ Johnny Marr, have cited him as an influence. Rory remains a touchstone for all would-be guitar heroes in the 21st Century.
Rory Gallagher
Digitally remastered